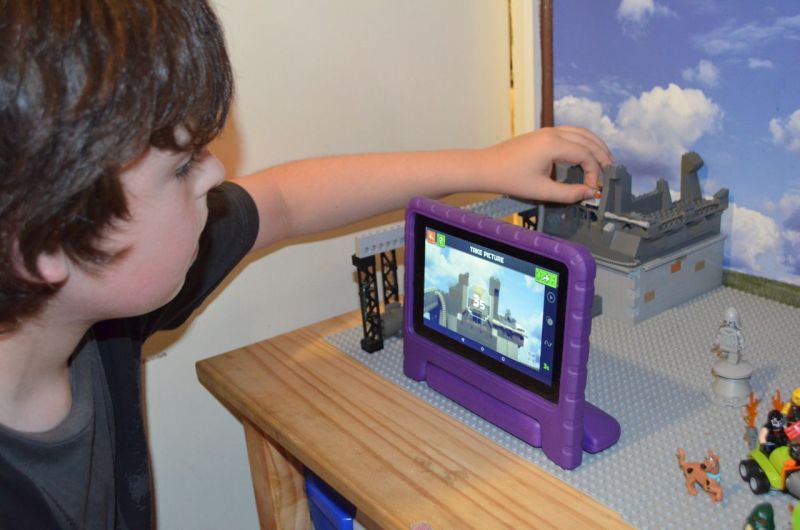 The love of Brickfilming seems to be growing in our house. I try to involve the kids in the animations as much as I can, and they have joined me in building sets, designing minifigures, voice over work, acting and animating during the time we have been making Brick Films… But recently Morgan downloaded the Minecraft Stop Motion Movie Creator onto his Kindle Fire HD and decided to try making his own animations independently of me…

He sat for a good couple of hours making various test animations and working out the best way to use the software, move the minifigures around and add the music and titles to his films. The software seemed quite intuitive to him, and the tutorial slideshow that was part of the App was easy for him to understand and gave him a good beginners insight into the Apps functions as well as the basics of stop motion animation. Like most stop motion software, you can take pictures from within the app, and it strings them all together on the timeline, allowing you to change the frame rate from 1 to 30fps and has the option to delete frames that are wrong or you want to change. The editing options include basic colour control of the frames (Brightness, Contrast, Hue, Saturation), the option to extend the length of individual frames, a text editor and the ability to add and record sound fx, which for an App that is FREE to download, I didn’t really expect that much. One of Morgan’s biggest problems was camera wobble, as his Kindle is in a case which has a stand on it, but isn’t that stable. Every time he touched the screen the Kindle would move slightly and that camera shake was evident in his animations, so we resolved this by using the Apps handy 3 second timer function which was enough time for the Kindle to settle before the picture was taken. By using this, Morgan saw a great improvement in his final movies.

Once you have finished your animations, the Minecraft Stop Motion software has some Minecraft themed title screens, fonts, and colour choices so you can add titles and outro credits to your movie, plus 9 video effects like Pixellated, Vivid and Underwater to change the look and style of your video. Lastly you can choose from one of 11 Minecraft theme pieces of music to play under your movie, which can then be rendered and exported to the in-app Gallery at 720HD. I managed to get the animation off of the Kindle via it’s USB cable and onto my iMac as a .webm file, which I had never heard of before. I managed to convert that in Handbrake to an MP4 which was usable for YouTube.

Unfortunately, there were a couple of downsides to animating with the Kindle. Firstly the camera on the Kindle is only 2MP, so image quality isn’t that great and the video ends up slightly pixellated and noisy. Secondly there doesn’t seem to be a way of adjusting the camera focus from within the Minecraft Stop Motion App, meaning that you always have to keep the camera at a set distance. But again, this is a FREE app, aimed at kids on a tablet that costs £50 from Amazon, so I suppose you can’t expect too much!

Overall Morgan had a lot of fun using the App and it allowed him to express himself creatively as well as learning to do things for himself. Although being a great starting point for him, he has expressed an interest in trying to find a better Stop Motion app for the Kindle, so we are, of course, going to have a look for that, and probably do another blog once he has had a chance to use it. But, for a simple, fun and creative step into Stop Motion animation, the Minecraft Stop Motion Movie Creator is a good start, but it won’t be long until you find yourself wanting for something a bit better!

Check out one of Morgan’s quick Kindle test animations below:

Until next time, keep animating,