This little project was actually the brainchild of my good friend Rich Wildman. Rich and I have done many projects together, from writing songs, podcasts and radio shows, with Rich even contributing his voice as Morpheus and some Special FX in our Playtrix animation. Rich is big into his 360 VR camera and runs a small business http://www.vidz360.com/

Rich suggested that we might be able to combine live 360 VR footage with 2D Lego Stop Frame Animation, and after a couple of Skype calls we came up with the idea of the Lego Zombies in a real graveyard. Rich went out to a local graveyard and captured some footage and I set about animating the zombies on a green screen, so Rich would be able to remove the backgrounds and put them in the scene.

Here is what Rich had to say about the video production:

“I can’t stress enough the need to watch this video using a VR headset, such as the Rift, Hive, Cardboard or other. The experience is night and day when compared to viewing the video on a computer monitor. Secondarily, please use headphones to experience the audio in it fullest.

While the amount of work put into this video encompassed months, it was a lot of fun to work with Ian in putting it together. I’m extremely pleased at how well the Lego characters integrated into the 360 video. The integration took a little post manipulation, but overall it was minor. The lions share of the work was spent on the audio, which is comprised of a lot of foley work. It seems the every piece of audio is not native to the original video recording. The night sounds (cicadas, crows, etc.,) were captured in the back yard, far away from the cemetery in which the video was taken. The zombie voices were performed by Ian and his family. I ‘volunteered’ my nieces, Jasmine and Natilee, to provide the digging sounds. The audio was then edited into a spatial track in Reaper, using the FB360 Workstation plugins.

The entire process, while time consuming, was a tremendous amount of fun. Thanks to Ian for indulging me in this idea and endeavor.”

Although short, this video is a fun step sideways into combining lego animation with other technologies and the results are pretty impressive I think… Big thanks to Rich for all his efforts on this and we hope you enjoy the show…

As Rich has said, this is best viewed in a headset of some kind, preferably with headphones! If watching on a flat screen, then view in Firefox, Google Chrome, or another browser that supports 360 content! 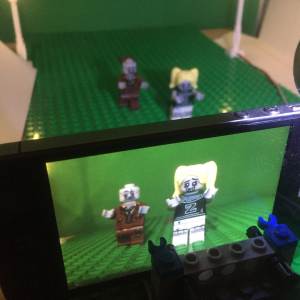 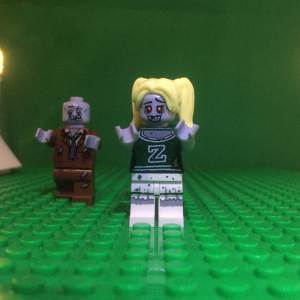