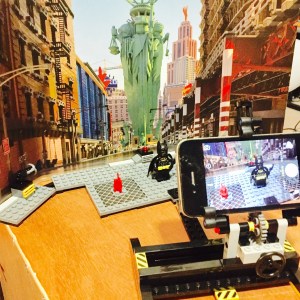 This is a quick test animation we have done to check out the Lego Batman Movie Maker Set, a new set from Lego aimed at Brickfilmers who use smartphones to make their movies. The 152 piece set allows you to build a small stage, with double sided backdrop and a camera rig. The rig includes a cradle for a smartphone that pans, tilts and pivots. The whole point of the animation was to test out the functionality of the camera rig and see how its movements could be used in a short film. Batman comes with the set, so we let him make a short appearance and this was the result.

We will be doing a more in-depth review of the set next week, so look out for that soon, but in short it was fun to use, gave me camera movements I haven’t had before and I will be keeping it built for use in my upcoming animations to see if it can add anything! I like that Lego are also encouraging other skills associated with their product, and would definitely like to see more ideas like this from them. On that note, I have also noticed that the official Lego Movie Maker app has disappeared from the app store, so I am wondering if we might see a new and improved version of the app with a Lego Batman branding sometime soon to compliment this set? Let me know what you think in the comments!

The Batman Theme is something I put together a few years back for the kids to sing on, so I repurposed it for this!

It was filmed on a 5th gen iPod Touch in Stop Motion Studio!