We have been thinking about making an animation featuring a fight for a while now, it’s a direction we haven’t really gone before, except for a couple of simple ‘lightsaber’ fights for previous videos, which to be honest weren’t very good. So, when www.minifigures.com sent us out their Bruce Lee minifigure to play with, it made sense to feature him as the star of our fighting video.

The figure is an awesome representation of the iconic martial artist, based on his appearance in Enter The Dragon, with the cuts and scratches over his face, arms and torso and a double sided head, one with scratches, one without. Allegedly Bruce Lee was the fastest martial artist ever, and in filming him they had to tell him to slow down his moves as well as slowing down the film so that the human eye could actually see the punches and kicks he was throwing.

To capture that speed, we decided to film the fighting parts of the animation at 30 frames per second, which meant making a lot of the moves for each frame a lot slighter than we would normally if we were shooting in 15 fps for example. This was indeed a challenge and took a lot longer than our usual animations to get done. But the results are quite slick and actually capture the sense of a fight rather than the slow sluggish movements we have previously managed to accomplish. Filming in 30fps also allowed us to do an effective slow motion punch that didn’t look too jumpy. To give the fight scenes good visual pacing I tried to keep each segment quite short and change the camera angles a lot, again trying to capture the sense of speed that is seen in Bruce Lee’s real fights.

Another thing that we have been aiming to do is animate other Lego creations that are bigger and more animatable than minifigures. For this video it came in the form of the Lego Creator 31032 Red Creatures set, which allowed us to build a fully animatable Dragon. With his moving limbs, wings, head and mouth he made the perfect character to animate. We wanted to get shots of him flying, so setup a green screen and animated him on that, then composited a sky and clouds in afterwards using Final Cut. We haven’t done much green screen work, but we were really pleased with the final results… 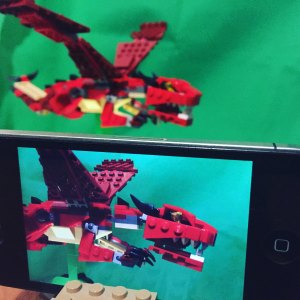 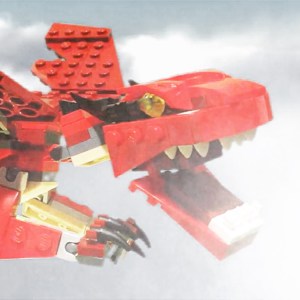 The animation was filmed on an iPad in Cateaters Stop Motion Studio, using an iPhone 4 as a wireless remote camera. The final edits, green screen compositing and overlays were added using Final Cut and the audio was added using Garageband, all on an iMac.

We wanted to give the animation a bit of a 70’s feel, so we played around with the colour balance of the shots, added a warm orange overlay and finally some film grain, from www.gorillagrain.com

To get your own awesome Bruce Lee minifigure, visit the guys here http://www.minifigures.com/products/bruce-lee.html and tell them that Ian at Minifigure Motion sent you!